Posted on July 5, 2017 by Hillside Automotive in How To, Safety, Tires

Do you know how old your tires are? Do you know when they were last inspected?

As the only contact between you and the road, your tires play the leading role in your car’s ability to start, maneuver, and stop. You trust your safety to them every day. Worn tires—especially bald ones—can be deadly on wet roads, where the grooves aren't deep enough to channel water out from beneath the tread.

Tires are considered bald when one or more of their grooves wears down to 1/16th of an inch, whereas a new tire tread is about 5/16th of an inch. Waiting until your tires are bald is much too late if you are driving in rainy weather. Consumer Reports testing shows tires at only half worn already have noticeably longer wet-weather stops, begin hydroplaning at slower speeds, and have a significant reduction in grip. 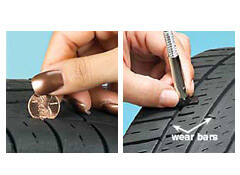 Inspect your tires and check their air pressure monthly.  By using a penny as a quick reference, insert the penny into the tread groove with Lincoln’s face showing, but with his head upside-down. If you are able to see all of Lincoln’s head, you’re past due for replacements. Manufacturers have also made bald tires easier to spot by placing a series of molded horizontal bars at the base of the grooves. The bars become flush with surrounding tread when wear reduces a groove's depth to 1/16th of an inch.

When replacing tires, it’s best to replace in pairs or sets of four for the best handling. Invest in quality. Even if your driving usually is at moderate speeds and relatively light loads, an occasional high speed trip loaded with passengers and luggage or stormy weather will more than justify your having the best you can afford. And, with proper care, the better tire will perform and wear better.

Bring your car to us at Hillside Automotive today and we’ll be happy to inspect your tires for you.